“To rediscover the charm and pleasure of traditional European society dances. ”

The Società di Danza is a cultural association that deals with the study, practice and dissemination of historical and nineteenth- century dances in particular, its activity is identified in the   Manifesto, in the Sistema and in the Materiale Didattico.

The Società di Danza, a cultural association founded and directed by  Dott. Fabio Mòllica in Bologna in 1991. organizes continuos courses, reconstructions of  gran balli in many Italian cities and in Europa,

training activities, stage  and historical dance seminars, produces a series of   books on the history

of dance in the nineteenth century and a series of  materiale didattico, collaborates with organizations,

institutions and associations and promotes historical research in the field of dance. 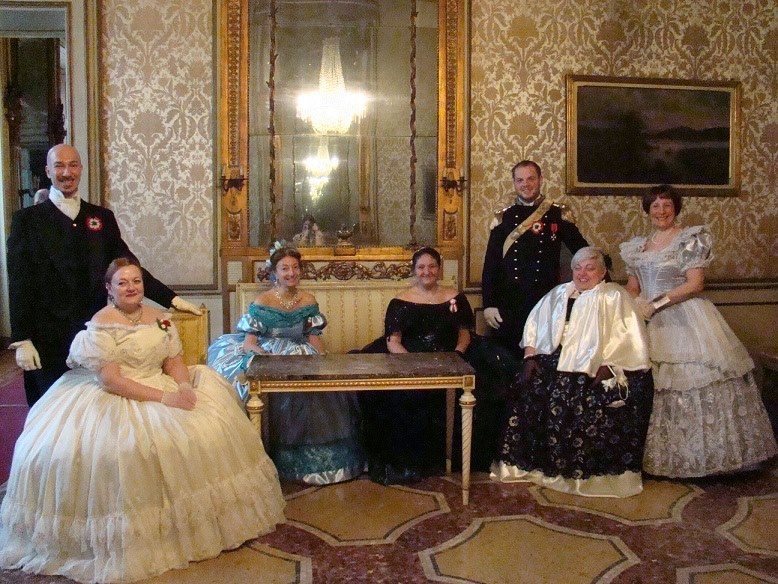 The purpose of the association is the study, dissemination and practice of 19th-century traditional dance.

Our dance system consists of group dances and couple dances;

to the first set belong Quadrilles and Contraddances,

to the second Waltz, Polke, Mazurke, Galop and dances derived from them.

The two sets are not rigidly separated, but live interrelated and form

the choreographic universe of our Società di Danza system of European traditional dance.

The dances of our system are conceived as a small social and artistic project.

The dance activity that we practice falls within the field of social or company dance.

This is a different practice from that which falls within the so-called historical dance.

The historical dance is the product of the research of the “Reconstructors” of ancient dances.

These scholars, using different methods of study, through comparative analysis,

The Dance of Society of the nineteenth-century tradition, that is the system that we practice,

Ours is a synthesis of what hundreds of dance teachers produced in the nineteenth century.

From diversity we have come to homogeneity. On the dozens and dozens of variations of a dance,

we made a synthesis and produced a single sample.

further development of the system.

In our idea of ​​social dance, the analysis of nineteenth-century manuals leads to synthesis

which establishes precise, clear and shared rules, so that a reality of the past

can return to be a living dance, reproducible and developable in the future.

With this in mind, the Società di Danza organizes Grand Balls and costume shows,

in order to spread its system.

The Società di Danza is a group affiliated with:

and international associations of the Società di Danza.

Since 1991 the Società di Danza has created:

in historic squares and buildings

Grand Ball of the European Union

Grand Balls of the Risorgimento project

of the University of Bologna, containing documents and materials

Dance Season of the Eighteenth Century

Since 2007 the   Società di Danza has continued, developed and expanded these study activities,

carried out numerous training activities (courses, internships and seminars) and  events in Italy and Europe

developed the  Gran Balli Risorgimentali project, aimed at the celebration

of the common historical-cultural identity of European countries

developed projects for training and dissemination of nineteenth-century dance culture

produced and created a film  ‘Un’Idea di Danza’ to present the study and dissemination work,

ideas and motivations, dances and the 19th century  Gran Ballo.